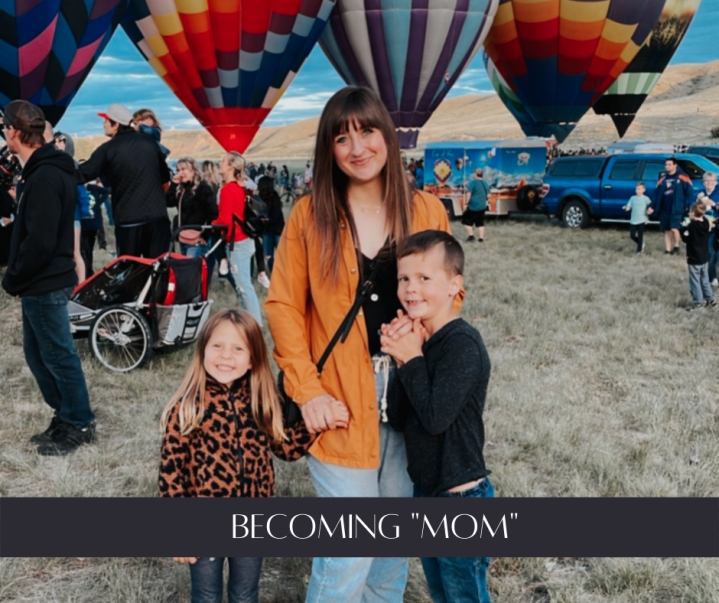 Nobody tells you what really happens when you become a mom. They tell you all about the pregnancy cravings and “eating for two”. They joke about how you’ll never sleep again. You hear all kinds of horror stories about labor and delivery. They reminisce about sweet moments with their newborns amidst pauses to shudder at thoughts of diaper blowouts that haunt their dreams well into their kids’ teenage years.

But they don’t tell you about the part where you say goodbye to the person you once were without ever really realizing you were leaving. About the subtle shift out of the body of an individual into someone who exists as an extension of other people.

Or maybe they do. But let’s be honest – if you were like me, you shrugged it off or weren’t listening in the first place.

Please don’t misconstrue what I’m saying here. I love my kids deeply and am forever grateful to be their mom. But since the moment they were born, my primary focus in life has shifted to either mentally preparing myself to consider their needs, or responding in the moment to the ones I didn’t think about. Even now that my kids are 4 and 6, my day starts and ends with someone needing something. A drink of water. Something to eat. A referee to break up a fight. A counsellor to talk someone off the ledge when their shoes are too tight, their favourite shirt is dirty, or the food on their plate is “too disgusting”. I make lunches and practice spelling. I write down deadlines to sign up for sports and RSVP to birthday party invites. I try to remember school dress up days, fundraiser events, parent teacher conferences and play dates. This is what comes with the territory of being a mom.

My husband helps out a lot and is a great dad to our kids. He plays with them and feeds them and tucks them into bed. He stays up with them when they’re puking their guts out in the middle of the night and graciously lets me sleep through it all. He gets them to the bus and picks them up after school. There’s been a shift for him too, of course. I don’t for a minute think that becoming a dad is a walk in the park, but *ahem* I’m here to talk about becoming a mom, so let’s refocus.

Last weekend, I left the kids behind and made a solo trip out of town to visit some friends I haven’t seen in a year. I was excited to make the three hour drive alone, where I could listen to whatever podcasts my kids would ordinarily beg me to turn off because they were “too boring”. I relished in the freedom of being able drive without stopping because someone had to pee, and then three minutes later stopping again because they realized they had actually needed to poop. I only thought about snacks for myself. I filled up my coffee tumbler and hit the highway.

When I made it to my friend’s house, we visited, snacked, and sipped our drinks without interruption. We made plans to go out for dinner at a time when I’d normally be in my pajamas, but for once, I wasn’t too tired to leave the house after 8 pm. We made reservations at a secret door speakeasy that we never actually made it to, because we got caught up chatting, picking at a nacho plate, and Instagramming our cocktails. It felt great to have an entire day where the only person whose needs I needed to attend to were my own.

As we left the restaurant and walked towards our ride, a group of twenty-something guys passed us. We hadn’t given them a second look until one of them called out, “Are you guys moms?”

I was totally caught off guard. What?

His tone wasn’t curious. It was condescending. At least that’s how I heard it.

Were we moms? What the hell was that supposed to mean? Never mind the fact that some of the friends I was with were, in fact, not moms, but do moms not deserve a night out to enjoy themselves just as much as someone fresh out of high school? And do moms need to get called out on the rare occasions that they’re alone, as if they’ve escaped from their child-infested lairs and need someone to come and collect them and drag them back home? We kept walking, but the comment has really stuck with me even since then.

I’m a mom. Yep. When I’m alone. When I’m with my kids. When I’m at home. When I’m in public. I’m a mom. I feel it in the depths of my being. It’s in every creak of my bones. It’s the undertone of every thought I have and word I speak. My kids are the foreground of my life and the background on my phone. They are absolutely everything to me. I’m a mom.

But I’m not just a mom. There are parts of me that I really, really want to hang onto, in spite of the fact that I have kids. And I’m not just talking about pseudo self-care like taking a shower once in a while and going to the grocery store all by myself. I want to pursue my hobbies. I want to have time for my friends. I want to go on dates with my husband. I want to read books that aren’t Junie B. Jones and watch something on Netflix that doesn’t have a laugh track and a 12 year old protagonist. And I sure as hell want to be able to go out to a restaurant and enjoy myself without someone asking whether I should instead be at home tending to my crop of offspring.

I’m a mom. But I’m also still me. So, to the twenty something kid who could probably use a mom to teach him a thing or two about manners – thanks for the reminder.